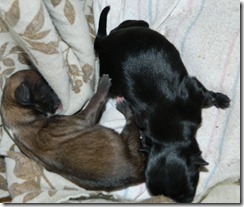 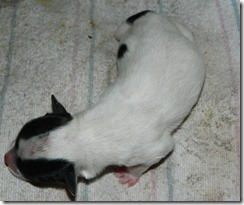 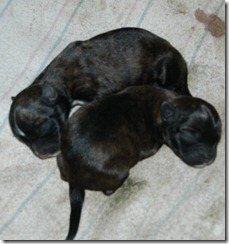 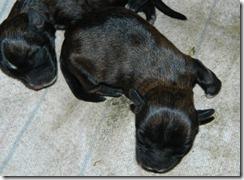 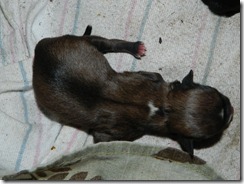 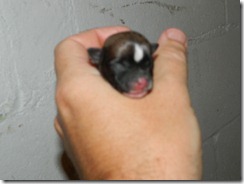 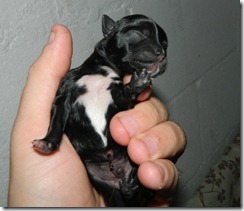 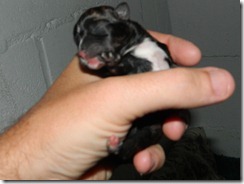 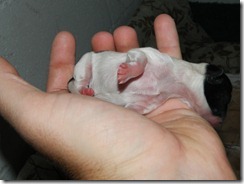 We literally woke up to Peppermint having her puppies on OUR bed at 1:33AM. She wasn’t due until next week to have her puppies, and we had her whelping box ready for her and everything. However, she gave birth early, and instead of getting down and going into a hiding spot like I honestly figured she would do, she gave birth right on OUR bed for the first three. Then we transferred her to her box (fully prepared) and she had the last two. At least I’m pretty confident she’s done. BEFORE you go harping that I should know how many she’s having. I took her to the vet (who has been a vet for MANY years!!) and he didn’t state that I had to have an ultrasound done because she is having more than one for sure and should be just fine since she is a healthy dog.
She is now resting and sleeping with her puppies. I gave her a small bath (vet approved.) I THINK I may have felt another puppy in there, but that could very well just been her nipples filled with milk as well. This is the first time I’ve ever had a dog have puppies and it will be the LAST time as well.

Peppermint was on the way to getting spayed when she got knocked up with my brother-in-law’s dog ONE time. However, I wasn’t overly concerned since they had ONLY got each other ONE time. Low and behold we have five puppies to prove it only takes ONE time to get knocked up in some cases. However, you can bank your bottom dollar when she is able to be spayed we are getting it done!!! I don’t want to ever have to stress over Peppermint’s well being like this again. She is a MAJOR part of my family, and I love her like I do my kids.

Speaking of which, I can understand now why mother’s want to be a part of their kids pregnancy and deliveries. My mother-in-law has been in the room with Delbert and Zeva’s births. She was filled with utter joy and proud as she could be. My mom just missed Delbert’s birth, but she was at the hospital as soon as she could get there!! I was filled with utter joy and literally cleaning as much of the house as I could while she was giving birth and hovering around checking on her. When she acted like she wanted my support I was there to give it to her. She did fabulously. However, I can tell she’s miserable. Poor thing.

On a good note, we were already wanting to get the boys an animal of their own. We just tried kittens (since Momma ALWAYS has a new batch of kittens), but they didn’t work out due to Zeva’s allergies. So, we were already considering getting other dogs for them. Now, they get to choose one of Peppermint’s puppies. We already know those dogs will work out great. The father of the puppies is a great dog as well. (He’s a terrier mix and is a great dog in my brother-in-law’s family.) So the puppies will be well temperamental for sure.

I think they turned out to be quite cute as well!!! Of course, I could be biased.
Here’s a picture of Peppermint with her puppies: 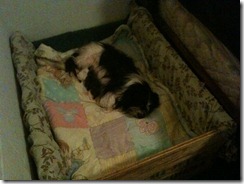 Now, I will go on the record and say that next time I feel it’s time to spay/neuter an animal, I will NOT wait to do it again.
I am one proud mommy/grandmother for sure. I will enjoy having a vast majority of these puppies as a part of family. Two of them will be needing new homes for sure though; which two won’t be decided until we get to know the puppies completely.

May you have a great day.

Ramblings of a SAHM

1 thought on “Puppies, Oh My, What a Wake Up Call”