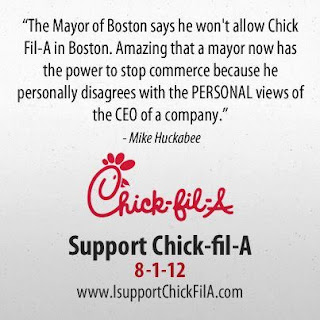 “Opinions are like A-holes, we all have one.” I was raised up hearing this all of my life. I can’t even begin to tell you how much that quote came off my lips. I have always been opinionated, but I have always been the type of person who believed that other’s had the right to have theirs as well even if it DISAGREED with mine!! I wasn’t going around banning people and products from my life just because they have an opinion that was different from my own.

Today all over Facebook people are talking about the fact that people are supporting Chic-Fil-A even though many gay rights people are trying to make people ban going to their restaurants because they do not support gay marriages. If gays do go to their restaurants, they are instructed to kiss openly in Chic-Fil-A locations. Now we live in a society where gays are all over the place and they are no longer forced to be discreet about it. It’s actually becoming popular on shows, movies, and even books.

All throughout high school, I was best friends with a guy who was gay. He was the most remarkable male friend in my life!! In fact, he honestly and truly earned the medal for being the best friend a person could have. However, I lost touch with everyone during my first pregnancy because I went into a MAJOR depression. Therefore, I lost our bond and wonderful friendship. However, I stressed my belief that marriage should be between a man and a woman due to my Christian beliefs.

We all have differences of opinions and/or beliefs in some form or fashion. We live in America where everyone has the right to their opinions and/or beliefs. It makes it a great place to live. However, God stated to love the sinner but not the SIN!!!! I’ve made my fair share of mistakes sexually, and my thoughts on the issue have changed throughout the course of my life. However, by the grace of God, I am saved. I also believe my life is healthier as a result.

Do I think people should be banned from my life because they are gay?? NOT IN A MILLION YEARS!!!! I have many people in my life who are gay and I think they are truly utterly amazing people!!!

Sometimes in our life and society we have to choose our battles. My battle is to express that we shouldn’t be banning anyone just because they have a different belief or live a different lifestyle than we do.

1 thought on “Opinions….We ALL have One…”