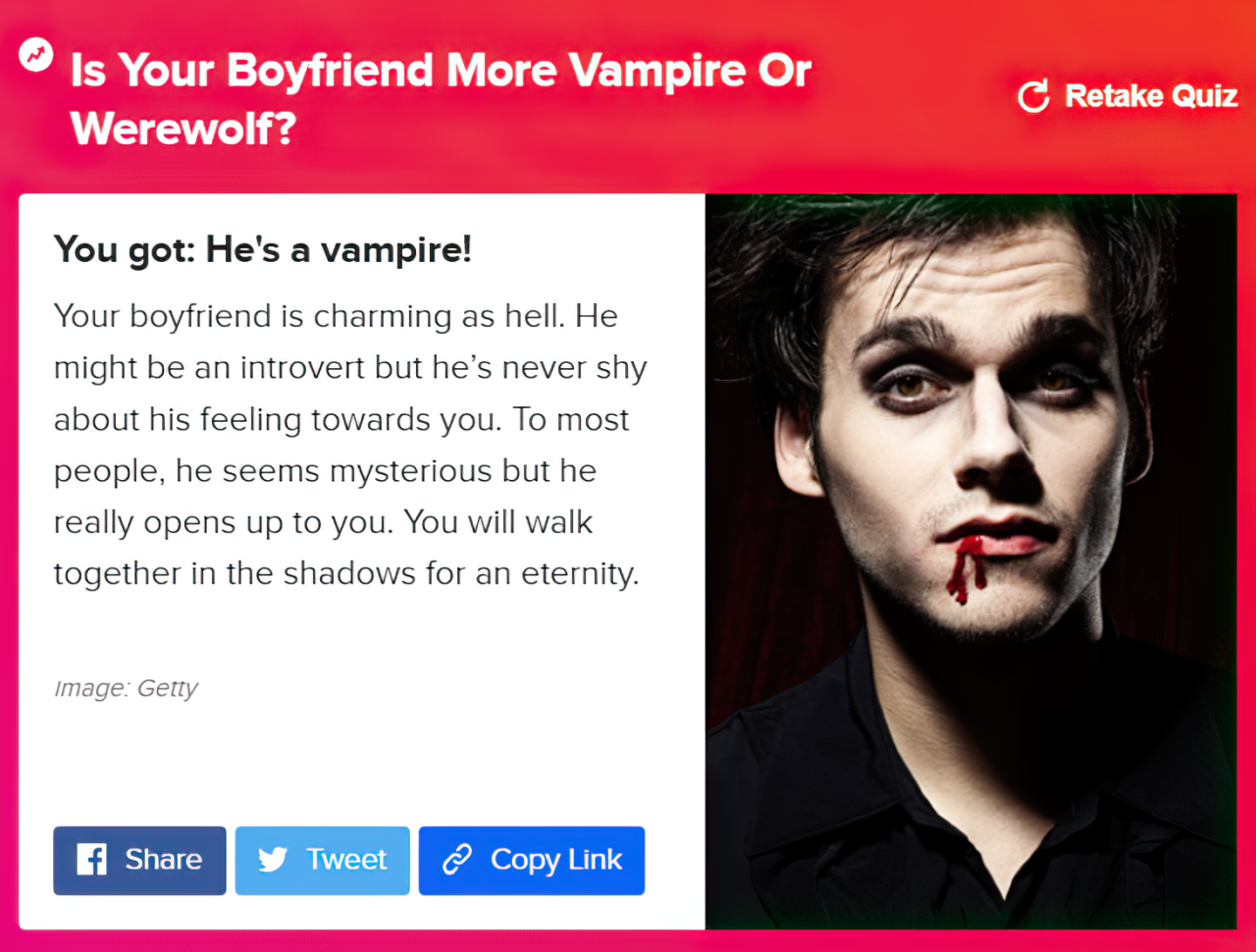 After scrolling through Buzzfeed for a few minutes, I came across a quiz called “Is Your Boyfriend More Vampire Or Werewolf?”. Since I had nothing better to do at that moment, I decided to take it. I will admit that taking Buzzfeed quizzes has always been a weird guilty pleasure of mine. Anyway, back to the subject of having a werewolf boyfriend quiz edition.

When I first opened the page, the first question that appeared was “which feature do you like most about your boyfriend?” After thinking about my answer for a few moments I went on to finish the rest of the quiz while I still had some free time left in my day. The quiz took about a minute or so and consisted of seven questions that were apparently able to figure out if you had a werewolf boyfriend or a vampire boyfriend.

These were my results. According to Buzzfeed, apparently my boyfriend is more of a vampire than a werewolf. I doubt that he is because they only exist in tv shows, movies, books and more on. However, for the sake of this, I will say that I’m not mad about my results.

Although I do enjoy watching a classic werewolf movie on a good day, if I had to choose having a werewolf boyfriend or a vampire boyfriend, I’d choose the bloodsucker. Mainly because I’d be terrified if my significant other turned into a hairy beast once every full moon with no remembrance of his human girlfriend. Vampires aren’t the best either since they suck blood, are immortal and so on. However, at least they have control over themselves to some extent whereas a werewolf does not and will tear any human they see to shreds.

Moving forward, after I finished taking the short werewolf boyfriend quiz I decided to scroll through the comments because why not right? Let me tell you, after reading all that I have one word. Twilight. I am sure you have all heard of the famous book and movie series about a vampire named Edward falling in love with a human being named Bella. In the series there was a bit of a love triangle with a werewolf named Jacob. The comments section was full of fans of the series either happy about their results or upset about them. There were also just a few comments simply stating Team Edward or Team Jacob. I was surprised to see that fans of the show are still debating about the two men but at least it was humorous to read.

If you’re interested in taking the quiz, check it out on Buzzfeed.

Signs That You Have A Submissive Husband