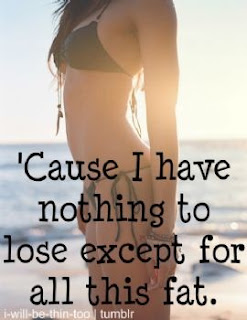 I use to feel pretty confident in a bikini. I had a bunch of them when I was a lifeguard. I’d love to go back to wearing one again. Although, Del clearly stated I was a one piece bathing suit person the rest of my life, unless he’s with me. I can’t say I blame him for him feeling that way.

I haven’t been doing so hot the past couple of days. I can always tell when I don’t have the healthy food I want to eat in our house because I start to crave things that aren’t good for me, and I’ll figure out a way to get it. We have been so hectic lately that getting to the grocery store has been hard to fit in lately too. (We have one vehicle and Del has been using it for work lately.) Plus lately Del has been working from sun up until well past sun down, and it is hard to stick to a schedule on eating when I never know when he’s going to get the chance to take a break and eat with us. Normally we eat lunch and dinner together as a family. The past two weeks have been none stop work for him with the exception of Saturday, which he made clear he wanted off way in advance, and kept it off. So, I’ve been doing a lot of snacking that I wasn’t doing for a long time to tide me over until we actually eat dinner. So, in essence, I’m back in a little rut.

I saw this picture on another woman’s blog today, and it really hit home. I want Del to be proud to have me on his arm. (Granted, he has always made feel like he’s proud to have me there regardless, but since I’ve lost weight and have started to have more confidence—which in turn makes me more sociable—he’s been making sure he goes with me everywhere.) I love having him want to be with me, and him making it known to all that I’m his wife more so than he was before.

I’m going to get off the wreck train I’ve been on for the last week because it’s not good for my goal and plans that I have. I’ve been able to keep with the boys a lot easier, and Zeva is progressing rapidly, so that means I’m going to have to the ability to be on the MOVE. My kids are worth every bit of changes I need to make in my daily habits. The boys have expressed how much they love that I’m more active with them and how happy they are that I’ve lost the weight that I have lost. So, they are being my big supporters and motivation. I won’t lie I need the support of others who are also on this journey with me. It definitely helps to know I’m NOT alone.

So, here’s to a better road this week. I’m going to make a solid effort to keep on pushing in the RIGHT direction. “If you want something bad enough, there won’t be any excuses.”