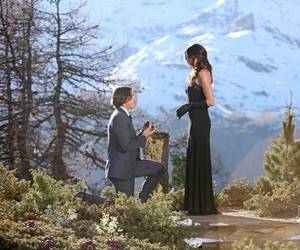 First off, I’d like to say that I wish nothing but the best for Ben and Courtney. I didn’t watch every little detail of this show because quite frankly, it’s gets to be very boring watching all the dating scenes and the catty drama that goes on with these shows. However, I usually make a point of watching the first show of each season, the home visits, and the final rose and the after the rose. Sometimes, I even watch the show where the girls tell all. That’s exactly what I did this season.

Let me first say, that EVERYONE was against Del and I being together when we were younger. I think that’s because I was high strong, social beaver, and honestly, was headed in a direction that he probably wasn’t headed in (that’s what the outsiders thought.) However, I saw something in Del that no one else saw. I saw his high strong spirit the first day I met him, and it attracted me to him instantly. However, he is not an easy person to get close to (and honestly, neither am I.) I let others influence my decision concerning my relationship with him for FAR TO MANY YEARS. I wasted ten years of happiness for us and those that were involved in our lives during that time.

It can NOT be easy dating one man along with 24 other woman competing for his attention either. You have to stand out in some form or fashion. Some of these woman (and men) have taken things to the extreme on these shows. I can honestly say that if I were on that show, I’d be the one that everyone was talking about. I’m to insecure to handle that type of setting (even when I had a strong dose of confidence and loved my body.) Woman naturally compare themselves to other woman. I know I find myself comparing myself to other women all the time, and Del quickly reminds me that I don’t have to do it. However, it’s been etched in me from an early age, that I have to worry about my looks and have to be a certain body style and dress a certain way in order to be liked.

It’s obvious Courtney wasn’t there for anything other than getting to know Ben. She didn’t appear to be two-sided or cocky (unlike some prior Bacherolettes.) I felt either she put on a heck of good act or she honestly and truly was sorry for her uncalled for comments that she made throughout the season. I personally wouldn’t have been able to get close to any other woman in the house either because they would have been a threat to my relationship with the man involved. (It would have been my way of coping with the insecuries I was dealing with personally.)

Every person reacts differently to different people around them. I literally respond to one person wonderfully, but the other person some how strikes a nerve in me that makes it really hard for me to gain a reasonable relationship with them. I can be pleasant and respectful, but I’m not going to go out of my way to get to know them. If I am running my mouth around you, that’s actually a sign that I like you and I trust that we can be friends. (Eventually though, I do get quiet and take the role of being a listener more than a talker though. Since really my life revolves around my family. Even though, I’m itching to get back into the workforce.)

I honestly think that in a different situation those ladies probably would have liked Courtney. However, they were placed in a scenario that made it hard to get to know Courtney for who she most likely really is. Ben was the reason why she was there, and she was free to be herself around him due to that reason. I was shocked he chose Courtney since I was voting for Lindzi (spelling may be wrong.) However, after seeing the after the rose show, I can see they truly do have something strong between them. It’s written in their eyes and the way they carry themselves. I just pray that they realize that they have to live their lives for them and not for the world’s approval. I learned that lesson the hard way, and I’ll never let someone else’s opinion of my marriage and/or our relationship come between us again!! Del and I are not perfect, but we are perfect for each other. We definitely do things that other’s can’t understand or grasp, but those are the little things that actually keep us binded and what it takes for me to have my level of security with him that I have.

Life Is Full of Instant Changes….